By now, you have likely seen the Bloomberg article (or reaction articles and videos) regarding Sony’s plans to release a limited amount of PS5 units during its first year. There is wide speculation as to why Sony plans to limit its highly anticipated next-gen console, from the costs associated with producing the PS5, to rumors that Sony doesn’t believe that the system will outsell the Series X or the Nintendo Switch in its first year. Let’s take a look at this rumored decision and see what makes sense.

Does Sony expect the PS5 to fail at launch?

The short answer to this question is ‘no,’ contrary to what the Xbox fanboys/girls would like you to believe. In this article, we’ll discuss a few factors to consider when looking at the news of this limited launch and why, as a business, this decision makes the most sense. We will start with the most straightforward reasons and go from there.

Before we start, it’s essential to understand the historical data from previous launches and compare that to the rumored production data we have:

According to Statista, the PS4 sold roughly 7.5 million units during its first fiscal year (which ends in March) and had a launch date of November 15, 2013. With Sony allegedly planning on producing 5 to 6 million units for the fiscal 2020 year, this information alone would make it seem that they do expect to see a drop in sales during the PS5 launch. 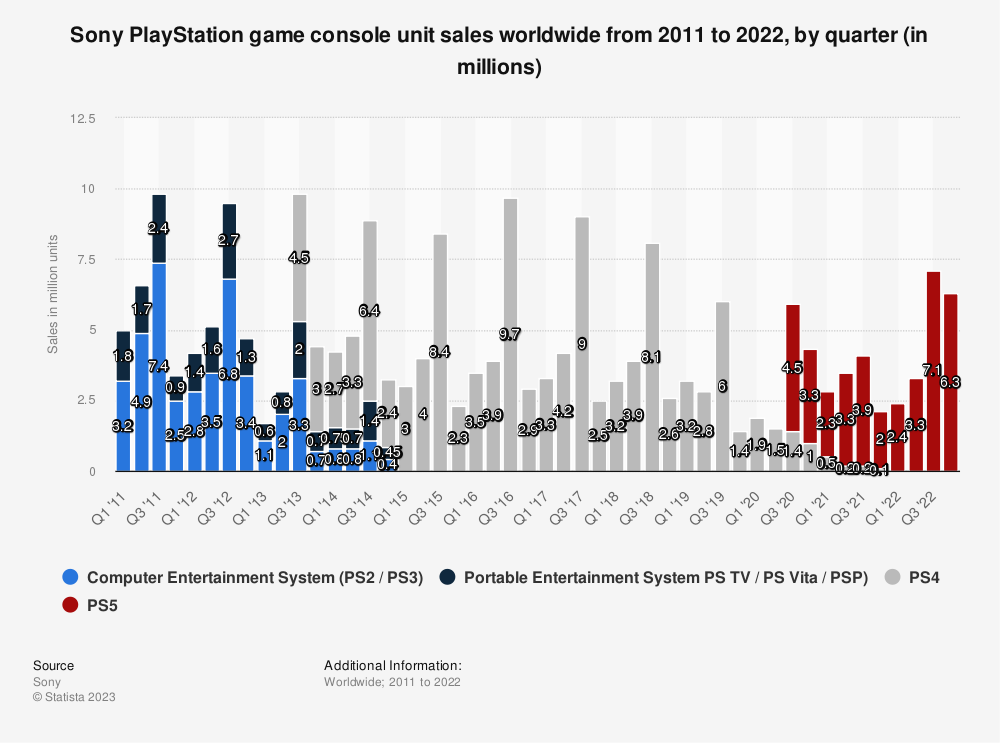 With the COVID-19 pandemic, game studios are operating with reduced staff or have closed entirely depending on their area, which means we are likely to see fewer launch titles and launch exclusives ready by the holiday 2020 season. Sony has a decision to make here: either delay the launch of the PS5 or release it to the public before those titles are ready to play. Historically, launch titles and exclusives (for PlayStation, Xbox, and Nintendo) drive the excitement for the next-gen consoles, which results in a large amount of FOMO sales. Another reason why we can safely assume that these launch titles and exclusives will have delays is due to the cancellation of significant public events such as E3, where many game developers and publishers announce their upcoming titles. Without these platforms and the attention they bring, and the lack of alternative media used to advertise their titles, many publishers have remained silent.

Another piece of production to consider is the costs associated with producing the PS5 and keeping costs low enough to be affordable to their general audience. Reports show Sony was struggling to source PS5 materials at a small enough cost in February of 2020 before the global response to COVID-19 added to this issue. Now that many industries have shut down and manufacturing has prioritized medical equipment, its safe to assume that this issue has only gotten worse.

Finally, the piece that has garnered the most attention regarding the PS5 launch is the current state of the economy. The argument is that the economy will still be recovering from the shutdown and that consumers will not have the rumored $449.99 – $549.99 that the PS5 will cost. Consumer spending is a valid concern, and if I were a decision-maker with Sony, I would certainly anticipate the launch of the PS5 to be “less successful” than previous ones.

How Sony benefits from a limited launch either way

If the PS5 manages to sell out during launch, think Nintendo Switch in 2017, this will only increase the demand for the console. The main difference here is that Sony will undoubtedly anticipate this and, by March of 2021, will be ready for a massive start to their 2021 fiscal year. When you look at it from a business perspective, stockholders and investors do not expect a high producing fiscal 2020 out of Sony due to COVID; however, by March of 2021, game publishers, as well as Sony, will be ready to hit the ground running. I could see exclusive titles and next-gen games to schedule around this and expect big March/April sales numbers for the PS5 and Xbox Series X.

What does this mean for the consumer?

The unfortunate side effect of the PS5 stock limit at launch is that you will most likely run into the system selling out, and 3rd party markets such as eBay flooded with private party sellers trying to flip them at ridiculous markups.

Our advice when that time comes would be to consider the benefits of upgrading immediately, and if you already have a PS4 or PS4 Pro, consider waiting until a few solid titles launched and ready to utilize the power of this new system.

We would love to hear your thoughts on the PS5 launch in the comments section below. Do you agree with our assessment, or do you believe something else?