For much of movie-making history, it was as if movie makers only had eyes on the future while it appears this decade is focusing on the nostalgia of the past. Regurgitating, remaking, rebooting, and sometimes… regretting movie plots in search of that vintage vibe. We have seen the written word get its big-screen limelight time and time again, now it’s time for the visually interactive to get its silver screen spotlight. Movie history has no shortage of acclaimed, attempts and atrocities when it comes to video game-based films. So “GET OVER HERE!!!!” and chime in on the 5 Worst, 5 Best and 5 Most Needed Video Game Movies.

Everyone’s favorite crime-fighting plumbers gained instant notoriety the minute it hit selves in 1983. Decades of Koopa crushing, Bowser beating gameplay is still as enjoyable now as it was then. However, the 1993 release of the “Super Mario Brothers” film took an absurd take on the game’s traditional storyline. The seasoned Bob Hoskins and young John Leguizamo portrayed the loveable New York plumbers as they battled an interdimensional threat from King Koopa (Dennis Hopper) and his army of dimwitted Dino-humanoid Koopa Troopa’s. Complete with Princess Peach and Yoshi, Mario and Luigi took on Koopa in an alternate post-apocalyptic/high tech universe equipped with Thwomp Stomper boots, magical mushrooms, and terrible dialogue. Short of storyline and CGI capabilities I’m sure we all wish we could flush this movie down and out of our memory banks.

Hellbent to find those responsible for the murder of his family and partner, a vengeful cop partners with a beautiful Russian mobster to battle supernatural forces plaguing the streets of New York on his quest for justice. Sounds pretty legit right? Did I mention that said badass cop was played by Mark Wahlberg and the Russian mobster was the sexy Mila Kunis? Well, “legit” stops there. On paper and in the video game world, this plot is pure gold. However, movie critics and fans alike were crushed by the failed attempt to reprise the Rockstar Game masterpiece on the big screen. Shot in the neo-noir, Max Payne’s dark and ominous style was about the only thing the film had going for it. Chalked full of bad cop/bad cop one-liners, crap special effects and an exhausting plot line that explains “drugs are bad, but can also save your life and make you superhuman”… this movie skimmed past box office bust, but won’t skim past needy gamers.

Nothing worse than sitting through two of these soul-sucking movies.

To be fair, this was the era that brought us Ninja Turtles and lacked special effects aside from Jim Henson esque super hero’s. Simply put, the ’90s lacked technology and budget for such lofty film attempts. Don’t get me wrong, Mortal Kombat and Mortal Kombat: Annihilation were horrendous and rightly so. Both movies combined budget toed around a $50-$60mil range in which today’s world wouldn’t constitute a single D list actor. Add in poor writing with a dash of porn acting and VIOLA… Mortal Kombat movie murder. Let’s hope this 2021 remake is the spine ripping, back-breaking, skull-crushing awesomeness we all deserve.

Well Jean Claude Van DAMN this movie sucked. Raul Julia and Jean Claude as M. Bison and Guile laid the groundwork for the martial arts suckfest that was the 90’s. No amounts of “HADOUKEN!” could have saved us from abysmal casting, lackluster fight scenes, and crayon written dialogue. The movie boasted a $35mil budget and fell short domestically in the box office grossing at a $33.4mil bummer.

Literally nobody: “Hey, they should make another Street Fighter movie…”

Enter Michael Clarke Duncan and Neal McDonough as Balrog and M. Bison with an even worse take on the beloved game. The $50mil budgeted movie amassed a whopping $12.8mil domestically at the box office plunging this gaming great further into movie massacre history.

*Movie announcer voice* “Watch as a team of space marines lead by their fearless leader Sarge, journey to Mars after a mass murderer is injected with alien DNA…”

Ok, I’m gonna stop you there.

While Doom was atop the more entertainingly intense action games of its time, playing and watching are two very different criteria for success. Never mind that Dwayne Johnson was still “The Rock” and not the A list movie star he is today. That plot sounds like the ramblings of a failed sci-fi author combining all his ideas into a smorgasbord of content. The shoot first, cuss later video game was the vulgar beauty for gamers consoles but an absolute shit show of a movie.

The utter failure of this movie speaks praises to Dwayne Johnson’s current roles in video game success stories like 2018’s Rampage that (while cheesy and cliché) brought in booming ($488mil) numbers to the box office. But will Rampage be apart of the 5 Best Video Game Movies list? 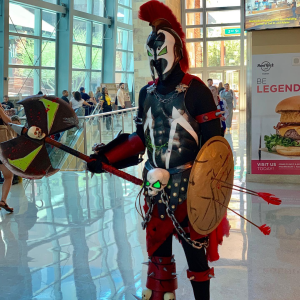 As a former professional basketball player, Lance heavily relies on his deep roots of sports, comics, gaming, movies and beyond for content. Partnering his inner nerd with a Broadcast Journalism degree helps provide the juicy stories, reviews, lists, and harsh biases here on Modern Gamer. The proud “knower of all and master of none” is a passionate cosplayer, comic book collector and Star Wars aficionado, who specializes at long-winded first-person RPG’s and mind-numbing sports games. Born in the 80’s, shaped in the 90’s and corrupted in the 2000’s, Lance welcomes all content suggestions of any genre that could help mold (and entertain) the next generation… of Modern Gamers.
Read all of my posts